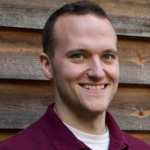 Follow Aaron Swanson
Aaron Swanson, DPT, CSCS is a physical therapist practicing in New York City. Aaron was first introduced to the world of movement and rehab as a student Athletic Trainer for the University of Tennessee Lady Volunteers. After completing his degree in Exercise Science, he attended NYU for his Doctor of Physical Therapy degree. Since graduating, Aaron has worked in private orthopedic clinics that focus on movement restoration through manual therapy, neuro-based exercise, and strength training. Aaron has a strong interest in the holistic approach to movement patterns and the integration of performance training into the rehab setting.
Read more by Aaron Swanson

Breathing has drawn a lot of attention in the past decade.  For something that’s mostly unconscious, it has become quite trendy.  Different approaches discuss the magic of breathing, athletes are now taught how to coordinate the core with their breath, and the diaphragm has become one of the most talked about muscles since the Transverse Abdominus became in vogue back in the 90’s.

So what’s the big deal?  Why is everyone jumping on the breathing wagon?

The reason why breathing has become so popular is because it’s a simple task that can improve many aspects of the human body – minimal inputs for maximal outputs.  And it’s not just mechanical, breathing has widespread effects throughout the entire body; from improving someone’s deadlift personal record to helping alleviating someone’s anxiety and pain.  Going over all the benefits of breathing is beyond the scope of this article, but understanding the 3 main systems of the body that breathing affects is a good place to start.

But before we go into the 3 systems, it’s important to quickly review efficient versus inefficient breathing.   proper breathing versus poor breathing technique. 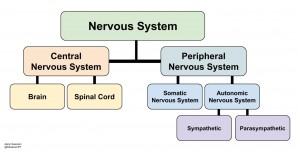 The autonomic nervous system (ANS) is involved in the physiological expression of stress.  It responds to stressful stimuli (internal inputs, environment, physical movement, etc.) with either a sympathetic or parasympathetic response.  Parasympathetic helps with the internal needs of homeostasis via the “rest & digest”response.  Sympathetic mediates the interaction with the external environment with it’s “fight or flight”response.  The resting state of the ANS can either be beneficial for overall health (parasympathetic) or detrimental  (excessive/malapropos sympathetic).  This depends on many variables, one of which is respiration.

Through this Brainstem-Respiratory Mechanism, breathing can have a major influence on your autonomic nervous system.

With poor breathing patterns, you will often have increased inspiration (sympathetic) and decreased expiration (parasympathetic).  This drives the ANS into a sympathetic state.

So you can drive the ANS to either side of the continuum, just by breathing. 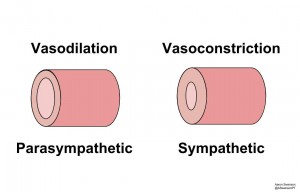 When it comes to healing injuries, blood flow and oxygenation are key.  Bringing in the proper cells to heal the injured tissue and remove nociceptive stimulating chemicals can make a huge impact on the healing process.

Besides the act of gas exchange, breathing affects circulation via the ANS.  It does so by changing the blood vessel’s diameter: Sympathetic = Vasoconstricion (decrease diameter), Parasympathetic = Vasodilation (increase diameter).  And if you remember from physics class, Poiseuille’s Equation shows that vessel diameter is one of the most important factors in determining blood flow.

It’s a four part process; you breathe more efficiently, you activate your parasympathetic nervous system, your blood vessels dilate, and you get more blood flow for growth and repair. 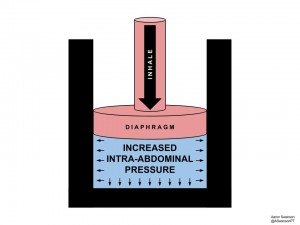 It would be exhausting if we had to do everything volitionally with only contractile structures.  Thankfully, the body has some passive stability to lighten the load (terminal knee extension, elastic recoil of tissues/tendons, foot supination for rigid osseous stability, elastic recoil of rib cage, alternating curvature of spine, etc.).

One of the more important passive stability mechanisms that we have is breathing.

Breathing creates intra-adbominal pressure (IAP).  It does this during the inhalation phase when the diaphragm compresses the intra-abdominal space like a piston.  This IAP provides passive stability of the center of the body; thereby easing the muscles both proximally and distally.

On the flip side of this, when the body loses this passive stability with a full exhale, it has to compensate with active stability (i.e. abdominal contraction).  Clinically this can be useful to help a patient engage their abdominals or increase the difficulty of an exercise.  Try having your patient fully exhale during a trunk stability exercise (e.g. bird-dog, dying bug, plank, etc.).

Understanding the affect breathing has on these 3 systems (ANS, Circulatory, Musculoskeletal) will increase one’s ability to properly prescribe breathing exercises.  Improving breathing patterns can help everyone, from your athlete that gets back pain during squats to your medicare patient that has pain and stiffness when turning their head.  So try giving your patients a simple breathing exercise (here and here) to help them obtain an improved nervous system, better circulation, and the power of passive stability.

Courtney, Rosalba. “The Functions of Breathing and Its Dysfunctions and Their Relationship to Breathing Therapy.” International Journal of Osteopathic Medicine 12.3 (2009): 78-85.