The anterior cruciate ligament (ACL) is important for maintaining stability of the knee joint, particularly in activities involving weaving, pivoting or kicking. Injuries to the ACL are relatively common knee injuries among athletes occurring commonly in those who play sports such as football, skiing and gymnastics. Injuries can range from mild (such as small tears/sprain) to severe (when the ligament is completely torn). The most common mechanism of injury is non-contact i.e cut & plant movement. Women are also 3 times more likely to damage their ACL than men. To learn the reasons why make sure you read the Physiopedia page.

Explore and Understand The Evidence Online with Expert Luke O’Brien

After sustaining an (ACL) there are two option, surgery or conservative management, both have pros & cons and both require extensive rehabilitation. Typically though, operative treatment is predicted to have a favorable outcome over conservative management in those who are; under 35’s; those who are physically active; those who have a better education and those with additional soft tissue injury. There is far less evidence to suggest which factors would indicated a more favorable outcome if treated conservatively. This is what Grinden et al set out to discover in the Delaware-Oslo ACL Study.

Aims: To identify early predictors of a successful 2-year outcome in nonsurgically treated patients with an ACL injury. A secondary aim was to assess if prediction models would be different before and after a 5-week rehabilitation program.

The study included 300 participants who did not undergo ACL Reconstruction and 182 who did. All participants had a diagnosis of unilateral ACL rupture diagnosed by MRI, participants were between the ages of 13 -60 and participated in regular physical activity. They were excluded if they had suffered additional soft tissue injury during the rupture or had previous traumatic injuries to the knee.

All participants underwent an initial short rehab plan to resolve effusion and ROM deficit regardless of reconstructive surgery or not. All participants then underwent a 5 week rehabilitation programme which aimed to restore muscle strength and appropriate neuromuscular responses.

After the 5-week  rehabilitation program, testing was repeated and surgical or nonsurgical treatment decided. If the participant experienced instability or wished to return to sports which involved jumping, cutting or pivoting, surgical reconstruction was advised regardless of progress of outcome measures.

What Was the Programme?

The rehab program consisted of single- and multiple-joint exercises; open and closed kinetic chain exercises; and concentric, eccentric, and isometric exercises with 3 to 4 sets and 6 to 8 repetitions per exercise. Plyometric exercises were gradually progressed. These exercises focused on the quality of movement and were tailored to individual patient needs based on that patient’s specific goals. Perturbation training was performed according to the study protocol and consisted of dynamic stability exercises on a roller board, rocker board, and platform. To see the details of the plan click the buttons below.

In essence non-surgical management should be considered a confident choice in athletes who are female, older and have good knee function early after ACL injury. The simple set of measures used within this study can provide 2-year prognoses and should be sued in early decision making.

This is a brielf summary of the study. To learn more about which outcome measures were used during the pre & post intervention stages then please read the study in full via the link below. 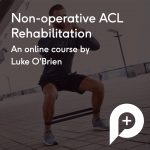 Considering the potential for postoperative complications, a small percentage of patients with ACL injuries might be suitable for non-operative management. An evidence-based set of screening tests can help us identify this group. Rehabilitation concepts are similar for both operative and nonoperative treatment of ACL injuries. However non-operative treatment is different with an increased emphasis on neuromuscular training to restore joint stability.