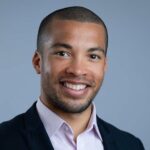 It isn’t uncommon for a patient to arrive at an initial physiotherapy consultation lacking insight into their newly diagnosed condition. In fact, they’ve often been given a lot of new information to digest in a short amount of time and therefore may arrive with mixed emotions. Consequently, patients can be quite anxious or uncertain and it is our job, as allied health professionals, to clarify, educate and reassure our patients before commencing any therapeutic plans.

Diffuse Idiopathic Skeletal Hyperostosis (DISH) is not only a challenge to say but also a complex condition to comprehend. I was recently reflecting on my first meeting with a patient diagnosed with DISH as a first year physiotherapy student and compared this to my two more recent encounters just last month. In a somewhat cyclical journey, the experiences reminded me of the complexity surrounding DISH and the psychosocial impact it has. Therefore, I would like to highlight the condition, sharing a few key messages with the PhysioSpot audience.

Diffuse idiopathic skeletal hyperostosis (DISH) is a common disorder that was 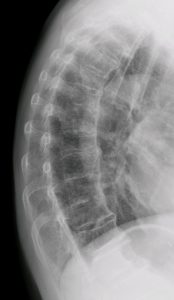 coined by Resnick and Niwayama in 1976. Previously known as Forestier’s disease or Ankylosing Vertebral Hyperostosis, the term DISH is now preferred and more widely utilised today (Oudkerk et al., 2016; Mader et al., 2017). Hyperostosis describes excessive growth of bone, henceforth; we can begin to consider how DISH presents within the musculoskeletal system as the clues are somewhat in the title.

DISH is thought to be a non-inflammatory, systemic disease characterised by continuous ossification (laying down of new bone material by osteoblasts) and calcification (hardening of tissues due to a build-up of calcium salts) of ligaments and entheses, especially affecting the axial skeleton but also peripheral joints (Nascimento et al., 2014; Oudkerk et al., 2016; Mader et al., 2017). You can read more about entheses in my recent post; Enthesitis Under the Spotlight.

The anterior longitudinal ligament of the spine is most commonly affected within, but not limited to, the thoracic spine, whilst enthesopathy can occur at many sites such as the ischial tuberosities and greater trochanters for instance. Paraspinal connective tissue fibrosis and degeneration of peripheral annulus fibrosus fibres can occur too.

The anterior longitudinal ligament of the spine is most commonly affected

The exact aetiology of DISH is difficult to determine. Genetic, endocrine-related, environmental and mechanical factors have all been proposed (Nascimento et al., 2014; Oudkerk et al., 2016), as well as DISH being a possible indicator of underlying metabolic disease (Mader et al., 2017). It is also believed that obesity, diabetes mellitus, hypertension and dyslipidemia are among the risk factors for developing DISH (Nascimento et al., 2014).

The prevalence of DISH increases with age and is thought to be approximately 10% in people over 50 years of age (Mader et al., 2017); notably uncommon in those younger than 50 years. DISH is more common in men than in women to varying degrees (Oudkerk et al., 2016; Mader et al., 2017) and recognised associations of DISH include: ossification of the posterior longitudinal ligament; hyperglycaemia; and, possibly, human leukocyte antigen (HLA) positivity but not necessarily HLA B-27.

Dependent on the patient, and on the presence of spinal or extra-spinal ossifications, symptomatic features can include polyarticular pain, back pain, generalised stiffness, reduced range of motion, an increasing risk of spinal fractures and, rarely, dysphagia (due to mechanical compression by cervical bone production). Spinal fractures can occur following relatively low-energy trauma incidences and can be missed due to a baseline level of spinal pain in these patients (Mader et al., 2017).

Most individuals with DISH are asymptomatic and so there can be delays to diagnosis; often, incidental findings arise on imaging for other causes. A difficulty with studying the pathophysiology of DISH is that a formal diagnosis requires the presence of all the features mentioned below, which probably represent advanced stages of the condition.

The most commonly used diagnostic criteria was introduced in the 1970’s, did not reach consensus, and today has its own limitations; namely, it was proposed in line with conventional 2-dimensional radiographs which predate existing 3-dimensional computed tomography.

Recognised radiographically by Resnick & Niwayama (1976), the diagnosis of DISH requires the involvement of:

When a patient meets these criteria, another classification system can be used to score the amount of ossification of each vertebral level and degree of bridging (Mata, 1998).

Further still, the Utsinger criteria helped to lower the threshold for DISH diagnoses (Utsinger et al., 1985). The criteria reduced the number of bridging bony changes whilst introducing the component of peripheral enthesopathies.

While OA and DISH share similar patient demographics, DISH symptoms usually develop in joints rarely affected by OA, such as the shoulder, elbow and metacarpophalangeal joints (Nascimento et al., 2014). From an imaging perspective, put simply, osteoarthritis of the spine usually shows prominent facet joint degenerative changes as well as cartilage and disc degenerative changes, and the presence of bony spurs known as osteophytes, which DISH does not.

In AS, patients tend to be younger, within their 20s – 30s and demonstrate the presence of bridging bony formations known as syndesmophytes, often thin and vertically orientated compared to the thick, coarse, horizontally orientated bony bridges formed in DISH (Mader et al., 2017). You can read more on AS and axSpa here.

It can be challenging to differentiate clearly between radiographic axSpa and DISH. Both diseases affect the axial skeleton and peripheral entheses along with similar postural changes and a resultant decrease in spinal mobility. Weiss and colleagues (2015) investigated the diagnostic accuracy of whole-body magnetic resonance imaging (WB-MRI) alone and in combination with clinical variables (BMI and age) to discriminate between AS and DISH. The authors claim ‘excellent’ discrimination between these patient groups when using a combined approach. They surmised that evidence of ankyloses and upper corner fat infiltration of the spine were the best discriminatory features on MRI and that oedema of the sacroiliac joints is uncommon in DISH. Weiss and colleagues (2015) do clearly express caution in interpretation of their findings due to their small, case-control study and absence of asymptomatic DISH patients.

A recent systematic review by Mader and colleagues (2017) found limited evidence surrounding DISH, highlighting therapeutic studies in particular and stating that the main issue presently was that the classification criteria only allow for late-stage recognition of DISH.

There is a lack of disease-modifying therapeutics and so the suggested treatment of DISH has been directed towards musculoskeletal symptoms, the associated metabolic and constitutional comorbidities, and any other complications that may arise. The treatment of pain in those with DISH appears largely based on the treatment of OA with analgesics, non-steroidal anti-inflammatory medications, symptom focused physiotherapy treatment and lifestyle changes.

…the current classification criteria for identification of DISH need to undergo revision.

Another recent systematic review by Kuperus and colleagues (2017) agreed with that of Mader et al. (2017) highlighting a lack of consensus in the diagnostic criteria. The paucity of evidence leaves many clinicians working on a ‘treat what you find’, individualised basis – a very good starting point, but certainly an area that could be developed in order to improve treatment effectiveness.