Admittedly, in university I hadn’t heard much about an enthesis, enthesitis or enthesopathy – not even in cadaver anatomy classes. It just wasn’t something that was talked about, perhaps laying low under the radar compared to its better known neighbour; insertional tendinopathies, who were the focus of our ‘attachment-site’ injury understanding.

A few years ago, however, I noticed the increasing prevalence of these enthesis-related terms in the rheumatology literature. I now feel the spotlight deserves to be shone on them, to raise more awareness of rheumatology, applaud the academics seeking answers, and further the understanding of those curious physiotherapists who may be particularly interested. This article is a brief overview of enthesitis, providing useful references for further reading.

What is an enthesis? (pl: entheses)

An enthesis is the connective tissue between tendons, ligaments or joint capsule insertions to the bone. There are two types of entheses: fibrous and fibrocartilaginous (the latter more common in rheumatic conditions; a tough, elasticated compressible tissue). Entheses are found all around the body, an example of this at the heel is shown below. Other entheses mentioned in the literature are at the patella tendon origin and insertion, the tibialis anterior insertion, the iliopsoas insertion, the common hamstrings insertion, and the acromial and clavicular insertions of the deltoid muscle (Benjamin et al., 2004; Kehl et al., 2016). 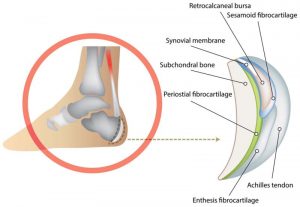 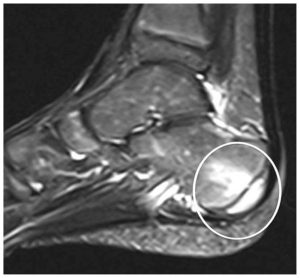 Like many of the body’s tissues pathology can occur for many reasons. Put simply, enthesitis is the term used to describe inflammation at the entheses, crucially with or without swelling. The presence of which stiffens the tendon/ligament structures altering biomechanical stress (McGonagle & Benjamin, 2009). Enthesopathy, much like tendinopathy for tendons, is an umbrella term used in the literature to describe any disease process or disorder of an enthesis. Mechanically-related enthesopathy can arise from injury and micro-injury and may have a degenerative element (McGonagle & Benjamin, 2009).

Historically, it was thought that these pathologies were focal insertional abnormalities at the enthesis site, but that viewpoint has changed (Kehl et al., 2016). Coined by Benjamin et al (2004), an enthesis organ complex is now the preferred reference for enthesis-related pathology, incorporating more of the surrounding structures in the disease process. The enthesis organ complex is thought to encompass not only the enthesis but also the bursa, fat pad, adjacent trabecular bone and perhaps even deep fascia (Kehl et al., 2016). Arguably, this could be why enthesitis is a diffuse process of intricacies beyond the scope of this article.

Enthesitis typically presents as pain, stiffness and tenderness of insertions without much swelling. However, swelling may also be a feature in larger insertions of the lower limbs. Enthesitis is diagnosed clinically with pain elicited on local pressure of entheseal points, or through use of imaging; magnetic resonance imaging or ultrasonography (McGonagle & Tan, 2015; Kehl et al., 2016).

Ultrasound is believed to be more sensitive at identifying enthesitis than clinical examination and can establish specific parts of the enthesis organ complex affected (Plagou et al., 2016). Furthermore, there are recommendations on the use of ultrasonography in identifying the most common rheumatic diseases (Plagou et al., 2016) and this is a useful document for the perusal of those interested in diagnostic ultrasound and differential diagnoses.

Clinically, enthesitis may be difficult to recognise without the presence of swelling. The enthesis is a relatively avascular structure and so inflammatory markers, Erythrocye Sedimentation Rate (ESR) or C-Reactive Protein (CRP) for example, may not be elevated in entheseal-related disorders (McGonagle & Benjamin, 2009; Kehl et al., 2016). Additionally, many insertions are either inaccessible to the examiner, not evident on X-ray imaging early in the disease process, and present with poorly localised pain. It is also believed that tender points of enthesitis may be difficult to distinguish from those of Fibromyalgia (McGonagle & Tan, 2015).

As outlined in my previous post, enthesitis is an extra-articular manifestation in some rheumatology conditions, namely, diseases associated with spondyloarthritis (SpA). This group of seronegative conditions affect axial and peripheral joints including: ankylosing spondylitis (or axial spondyloarthropathy), psoriatic arthritis, reactive arthritis and undifferentiated SpA.

When considering enthesitis as a central feature of SpA, advanced imaging and pathologic findings have shown links between these inflammatory processes and adjacent osteitis (Kehl et al., 2016). In SpA the lower limbs are more commonly involved than the upper limbs, and heel enthesitis is the most frequent site found (Kehl et al., 2016). In reactive arthritis, enthesitis can be seen in over half of patients, and in psoriatic arthritis it is thought that a third of the population has clinical enthesitis (McGonagle & Tan, 2015).