I constantly see runners working on their core.  They do planks.  They do sit ups.  They do a terrifying exercise because they saw it on the internet.  They all hear that they need a strong core, so they strive to achieve it!

As a clinician, I also see a number of non-runners, many of whom have heard the same thing.  Build your core.  Sit with better posture.  Both groups typically have a misunderstanding of what this means.  In fact, I think most of us have struggled through the years at exactly what this means.

Posture is one of those things that gets talked about endlessly, but few truly understand what it means.  We constantly hear, sit up straight, stand up tall, but the fact of the matter is, this isn’t what good posture means!

Good posture is being able to adapt to the demands of an activity.  It is not bad to sit for an hour, slumped in a chair to relax and watch a movie.1  It may be problematic for a 40+ hour work week though.  Even then, if you sit with great posture for 40 hours/week, there still might be an issue.  If you run for 8 miles in perfect form, but never let yourself relax later, it could be a problem.  It could be just as detrimental if you strive for great postural form, but there’s a glaring deficiency that has been missed, resulting in compensatory motions.

Many of us have developed stiffness or weakness.  And when a clinician sees this, they typically put someone on a “postural plan”.  There are stretches, there are strengthening exercises, but the secret is to find where the weak link is.

Often, the difficulty is that the weak link is a moving target from patient to patient or runner to runner.3  Someone may show difficulty because of:

One of the easiest ways to address this is to have a plan developed which starts at mobility, and moves to more advanced stages.  If you miss a step along the way, the issue won’t be addressed to the point desired.

Let’s use an example that might be more apparent to our patients.  If someone had a frozen shoulder and their goal was to throw a ball, how successful would you be if you worked on throwing mechanics?  Everyone would be frustrated at the lack of progress.  You would need to achieve mobility, motor control, proprioception, and then finally progress the load/velocity of throwing a ball.

This is exactly the same when teaching posture to a runner.  You need to achieve mobility first.  Then you build control through the new range of motion.  Once you are there, you need to reinforce the new movement patterns.  Finally, you increase the difficulty with increases in resistance, velocity, and duration. 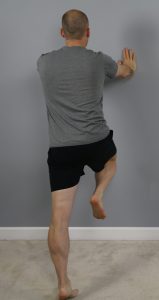 ACE uses a specific program for runners, which we have outlined in an E-Book by Co-Founder Doug Adams, PT, DPT, SCS, OCS, CSCS.  Finding your runner’s missing link is imperative.  Do you train their awareness with taping?  Do you address their poor hip extension mobility for an improved pelvic angle?  Maybe you need to address their glutes for proper hip extension control in late stance?2  Or maybe you train them against a load by practicing a wall drill?  Put together your own plan, or use the one Doug has put together, allowing your runners to run in a better position.

If you’re looking for the next step to get an edge when working with runners, learn the ACE Running Movement Screen and gait analysis classifications during the ACE Running Gait Analysis Level 1 Certification.