Its been an interesting first week of the Global Health course which focused largely on definitions and the emergence of the global health discipline from the domains of public and international health. A good place to start is with a definition of health which for the purposes of the course comes from the constitution of the World Health Organisation (WHO) written in 1948.

Health is a state of complete physical, mental and social well-being and not merely the absence of disease or infirmity.
WHO Constitution 1948

This constitution also recognises that health is not just desirable, it is a basic human right which nation states are obliged to support for all their citizens:

The enjoyment of the highest attainable standard of health is one of the fundamental rights of every human being without distinction of race, religion, political belief, economic or social condition
WHO Constitution 1948

A key element of this course has been to show the intersectoral and international nature of global health. This recognises that health is impacted by a multitude of factors including a persons genetic make up, their personal behaviours, their education and income, issues such as human rights and equality in their society and the healthcare system they have access to. Many of these factors are related to the person’s position in the social hierarchy and this overall impact is recognised by a model called the social gradient of health. This clearly demonstrates how a low social status is a predictor of reduced life expectancy and poorer overall health. 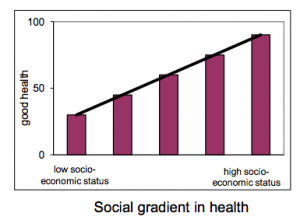 The impact of globalisation means that health related issues cannot be solely addressed at a national level. Actions need to be coordinated between nations for many health issues such as the spread of infectious disease.

Poor health is also identified as a significant burden on society through increased healthcare costs, reduced productivity, reduced personal savings and increased poverty. This demonstrates the benefits of investing in improving health but the factors involved means that this investment needs to go beyond the healthcare system.

A cited study of premature death in the US identifies the increasing significance of non-communicable disease and the role that personal behaviour plays in increasing health risks (McGinnis et al 2002). This study found that 40% of premature deaths were behaviour related with smoking being the leading single contributor to mortality. Non-communicable disease is not just a concern for the western world as globalisation and increased affluence have brought this “disease of civilisation” to nearly all corners of the globe. 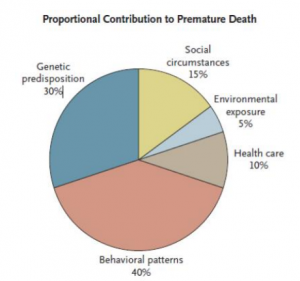 Three of the 8 millenium goals defined by the United Nations for development are identified as being directly health related:

Of these maternal health is highlighted as being the goal against which there has been the least progress.

Implications for physiotherapy and physical therapy

An aim of doing this course is to be exposed to the wide set of issues raised by the global health discipline as a prompt for reflection on the role of physiotherapy/physical therapy and so also Physiopedia in improving global health. The following are very personal reflections which we would encourage others to respond to and expand upon.

The most common measure used to define the health of a group of people used in global health research is life expectancy at birth. This focus on lifespan rather than the quality of life fails to recognise a significant part of of the definition of health provided by WHO and also under plays the importance of the role physiotherapy has to play in facilitating the optimal health of individuals. It is clear that physiotherapy must identify the importance of quality of life in achieving health, and the role it has in developing this.

A doctor saves a life, a physiotherapist makes that life worth living.

There are many, many factors involved in health much of which cannot be influenced by us as physiotherapists. However, for us to succeed as a profession and to make a contribution to global health it is important that we identify what factors we can influence.

With the increasing impact of non-communicable diseases it appears that influencing personal behaviour is a very important opportunity for impacting the health of patients in the long term. The nature of physiotherapy treatment with its relatively long consultations and extended programmes of treatment, means we are in a unique position amongst the healthcare professions to develop relationships and trust with the aim of ultimately changing damaging behaviours.

The millenium goal to Improve maternal health is generally measured in terms of levels of maternal mortality.  However physiotherapy has an important role in maternal health through antenatal and postnatal management to improve the mother’s quality of life before and after birth.  This is very much the approach taken in well resourced ‘developed’ nations which leaves us wondering, do womens health specialists have a role to play in both millenium goals four and five by contributing to reducing the risks to both mother and child during birth?

The millenium goal to Eradicate extreme hunger and poverty is identified by Jonathan Kruger (WCPT 2010) as another that is particularly relevant to the physiotherapy profession because of the professions work to increase the participation of the disabled in society.  This can also be extrapolated to any injured person and the optimisation of their health for social inclusion and return to work.

Disability is both a cause and a consequence of poverty… …physical therapy can promote social inclusion through optimising a person’s function and by encouraging participation in the economic and social life of the community.
WCPT 2010

Finally we noted that the WHO 1948 constitution states as an objective:

The extension to all peoples of the benefits of medical, psychological and related knowledge is essential to the fullest attainment of health.
WHO Constitution 1948

We hope that Physiopedia has a small but significant role to play here in the dissemination of physiotherapy knowledge and through providing opportunities for open global education.