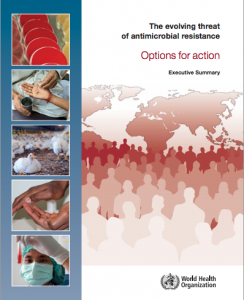 Antimicrobial resistance (AMR) is not a recent phenomenon, but it is a critical health issue today.  Over several decades, to varying degrees, bacteria causing common infections have developed resistance to each new antibiotic, and AMR has evolved to become a worldwide health threat. With a dearth of new antibiotics coming to market, the need for action to avert a developing global crisis in health care is increasingly urgent.  In addition to a substantial financial burden that national health-care budgets can ill afford, AMR has economic consequences far beyond the health sector, such as damaging repercussions on international travel and trade resulting from the cross-border spread of resistant infections. The cost of not acting against AMR needs to be considered when deciding resource allocation and assessing interventions.