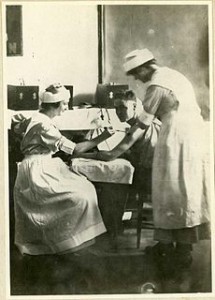 There has been on ongoing controversy over the various and diverse contraindications for electrotherapy modalities over the years. Many of the widely held beliefs in this area have been challenged in that there appears to be little by way of concrete evidence for many and a lot of anecdotal evidence about some of the others. However in 2010 a team of physiotherapists in Canada produced a seminal guide to contraindications and precautions in the use of electrophysical agents (EPAs), Electrophysical Agents – Contraindications and Precautions: An Evidence-Based Approach to Clinical Decision Making in Physical Therapy, this guide has recently been made freely available online.

The authors’ intent in developing this resource was to provide the physical therapy community with a resource that could guide clinical decision making for safe practice in the use of EPAs, thereby reducing the incidence of adverse reactions.  The resource was developed with the following objectives:

The aim of the guidelines was to provide a resource that could guide clinical decision making for the safe and effective use of EPAs; evidence-based practice was at the forefront of their approach. Their purpose was not to address indications for the use of EPAs, but rather to describe the evidence and prevailing opinions on the most common contraindications to and precautions for the effective use of EPAs, and speciﬁcally six commonly used EPAs: cold (cryotherapy), heat (superﬁcial thermal agents), electrical stimulation (TENS, NMES, HVPC), low-level laser therapy, short-wave diathermy, and therapeutic ultrasound.

The importance of the guideline ‘‘Electrophysical Agents—Contraindications and Precautions: An Evidence-Based Approach to Clinical Decision Making in Physical Therapy’’ by Houghton, Nussbaum, and Hoens simply cannot be overstated. This excellent work is timely, relevant, and important both clinically and educationally.