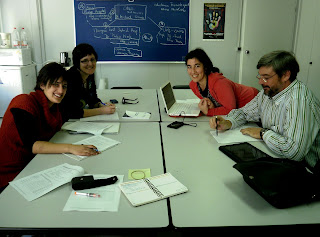 Today a meeting was held in the UIB (Balearic Islands University) with the team running the UIB-At the beginning of May Alicia Moratiel, Physiotherapist and Member of Mediterranea, a humanitarian aid NGO based in Mallorca, opened her email and saw the following communication from the College of Physiotherapists in the Baleares: ‘The NGO Mediterranea is developing a project in Ghana.  Part of this project is to start a physiotherapy dept in a small hospital in the East of the country just where the Volta enters the sea.  We need volunteers to help get things started and train the future local team.’ Alicia immediately started to gather more information.  She discovered that the hospital Dangme East in Ada Foah was organised by one doctor, Dr Philip Narth, who works 24 hours a day all days of the year and has 30 nurses for a population of 186000.  The ratio of nurses per inhabitant in Spain is 531 per 100000 and of doctors 445 per 100000.  In this region of Africa there is 1 for 186000!  It seemed to her to be completely disproportionate.  At the level of physiotherapy it seemed clear, a hospital that cares for a high percentage of cardiovascular and traffic accidents needs to have physiotherapy.  Also to rehabilitate post traumatic injuries, to assist the recovery of patients who have been operated, to reduce recovery time, to assist in the regeneration of epithelial tissue, burns, ulcers…these and others are the functions that Alicia thought they could develop. Alicia also discovered that Mediterranea had fulfilled a number of other projects at the hospital, including setting up a laboratory for the hospital and building a residence for mothers visiting the hospital with their children.  She was also surprised and happy to read in the Mediterranea blog that, thanks to the generosity of some British members, the physiotherapy project already had a substantial amount of equipment in Ghana waiting to be used.

From that point onwards things moved quickly.  At the end of May at the first meeting volunteers were able to learn more about Mediterranea, it’s ideas and philosophy, see some photos of the hospital and region, they covered some logistic themes like vaccines and first aid and learnt about all the documentation that was needed.  At the meeting they organised an administrative nucleus of physios to coordinate the physiotherapy side of the project. They followed this meeting with another some days later and had a number of lecturers from the UIB (University of Baleares) attend.  They established minimum and maximum stays for the volunteers in Ghana and agreed to group together the trips of volunteers to minimise the disruption to Dr Narth’s team in Ghana since the airport is 200+ km from the hospital.  They also allocated the different tasks amongst themselves.  As Alicia was not able to attend the first meeting and as someone completely new to this type of project she was hypnotised by the energy and enthusiasm of the other physios at this meeting and their desire to develop our profession into regions where it’s needed.  She also appreciated the big effort that would be required to coordinate the trips and handovers of not only our Spanish physios but also British physios who had responded with enthusiasm to a small communication from Mediterranea distributed through the Institute of Physiotherapists in the UK.

A couple of weeks later a third meeting was held to clarify some details and to go deeper into the second part of the project which is the training that will be provided to the locals in Ghana.  The first part of the project is immediate.  To get the physiotherapy dept up and running and they shall achieve this by maintaining a flow of volunteers to the hospital.  The second part will be a little more complex and will involve some communication between the University of Ghana’s physiotherapy dept based in Accra and the UIB, in order to launch an official training course for physios in that part of the country.

Since July last year  the UIB and the team running the UIB-Mediterranea NGO Physiotherapy program have sent 7 Physiotherapists to the Dangme East hospital in Ada Ghana where they have treated people and where they have introduced physiotherapy as yet another service the hospital can offer to the population it looks after. In the near future a team of 3 or 4 staff from the university will travel to Ghana to put in to effect a training program in conjunction with the Physiotherapy faculty in Accra.

Physiopedia is proud to acknowledge the efforts of the people involved in this project.  It  is a great example of what a few people and small partnerships can achieve to selflessly help those in need, spreading physiotherapy knowledge around the world to improve global health.