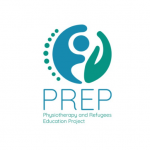 Three members of the Erasmus funded Physiotherapy and Refugees Education Project (PREP) team were in attendance at the recent WCPT Congress in Geneva which offered a great opportunity to share findings to date and network with colleagues working in this field.

Emer McGowen from Trinity College Dublin took part in the Migrant health discussion session. The panel and audience were united in their shared experiences of trying to alleviate the pain and suffering experienced by migrant populations around the world. Some were working in areas of conflict where emergency camps had been set-up, such as Syria. Others were trying to balance the demands of the existing population in their home country with a significant growth in the migrant population and the demands it places on the healthcare system, such as in Greece.

Mike Landry from Duke University and Rachael Lowe from Physiopedia were also in attendance and took the opportunity to discuss the project with colleagues to share details of the project and also, and more importantly, to gain knowledge from physiotherapists who are working in the field with refugees in many different contexts.