In this article Koen Schoolmeesters reviews a recent paper on movement strategies on the jump landing task and how it matters to knee pain.

Their results suggest that the amount of hip flexion seems to be the most dominant predictor for knee joint moments.  The amount of hip flexion at the deepest landing position was positively significantly related to the knee abduction moment and knee flexion moment.  This means that the therapists’ observation of less hip flexion during landing is associated with less knee flexion and a stiffer landing pattern with more load on the knee.  According to other authors, increased knee abduction – and flexion moments have prospectively been shown to predict patellofemoral pain and anterior cruciate ligament injuries.  Therefore, this more erect landing strategy is believed to increase both acute and overuse knee injury risk. 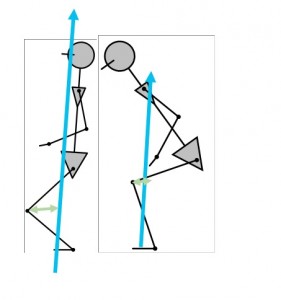 During an erect landing pattern the centre of mass may be positioned more posteriorly and increase the lever arm for the vertical ground reaction force at the knee thereby increasing the external knee flexion moment.  This will be associated with an increased quadriceps activation.  This erect landing strategy, that can be identified with less hip flexion based on the result of Dingenen, is charachterized by an overreliance on the quadriceps muscle while decreasing the reliance on the hip extensors.
The underlying reasons to use such a biomechanically less optimal landing pattern are probably associated with multiple factors within the kinetic chain.  A diminished hip extensor strength in relation to the knee extensor strength can be related to the tendency to land with an higher knee flexion moment in relation to the hip flexion moment.  However it remains unclear whether these strength deficits are the cause or the consequence of these less optimal landing patterns.  It may be possible that these landing patterns are the result of a learned motor program that the athlete has adopted over time, rather than the inability to produce force.

Movement re-education is therefore an essential component of effective injury prevention programs.  Based on their results, increasing the amount of hip and trunk flexion should be the primary focus to avoid high-risk knee moments.
Movement Analysis: see The Performance Matrix for a comprehensive system for Movement Analysis, Movement Training and Movement Programming

A review by Koen Schoolmeesters from Move to Heal