Two research studies published this week suggest that physical activity may protect against signs of brain aging in people in their 70’s, and that there is also a link with lower rates of dementia in people over the age of 90. The first study which was published in this month’s Neurology, entitled “Neuroprotective lifestyles and the aging brain: Activity, atrophy, and white matter integrity” found that exercise may be more beneficial for the prevention of brain aging in comparison with mental activity. The sample size, named the Lothian Birth Cohort 1936, contained 691 subjects born in 1936.

At the beginning of the study the participants, then aged 70, they were asked to complete questionnaires which rated their physical activity and how often they participated in social and intellectual leisure activities. This questionnaire was rated on a 6-point scale, going from “moving only in connection with necessary (household) chores” to “keep-fit/heavy exercise or competitive sport several times per week.” Frequency of participation in 15 social and intellectual leisure activities was also rated. 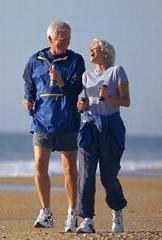 The second study “Poor physical performance and dementia in the oldest old, the 90+ study” published in this month’s Archives of Neurology is a cross-sectional study which examined the relationship between physical performance and dementia in subjects aged over 90. The 629 subjects, which included 31 centenarians, completed four physical performance measures. These were a four metre walk, 5 timed chair-stands, 10 second standing balance and grip strength. They were scored based on their ability to complete each task and also underwent cognitive tests. A history of cardiovascular or cerebrovascular disease and level of education, were also assessed and included in the analysis.

Although further research is needed in this area to establish the type of physical activity which is preventative to cognitive decline, both these papers emphasise the importance of physical activity in the elderly thus indicating the role of the physiotherapist in dementia prevention. Both papers are available at links below.