Years ago, there was an amazing article by Tim Kurkjian from ESPN.  He helped me (and many others) understand a phenomenon I was witnessing in baseball.  Guys weren’t pitching as much.

If you’re a fan of baseball, you’ve seen this trend.  There’s fewer 20 game winners.  There’s fewer starters who throw 200 innings.  Each year, this tends to tick further and further in that direction. Kurkjian discussed thought provoking ideas, such as the evolution of offense and the dwindling of easy outs. He broke down the injury rates and analyzed the statistics of growing offense, specialized relievers, and all the reasons the pitch count has become so dominant and typically has a ceiling of 100.

The problem here? While it is based on observational data and a feel for the game, it also isn’t typically specific to the pitcher on the mound that day.  We know that issues begin to occur when a pitcher fatigues, whether within game, from inadequate rest, or an off-day program which isn’t maintaining the strength and mobility of the shoulder.  What if you could gain an insight to this?

In a previous article, I discussed the ideas of Damian Andrisani, MD.  He aimed to recreate the deceleration phase of pitching, where arm fatigue 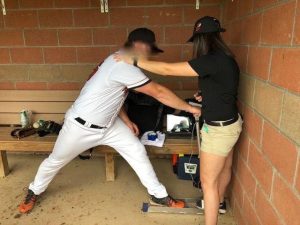 occurs.  If you could identify a fatigued arm, you would know when a pitcher needed to miss a start, adjust their maintenance program, or even be removed from a game. This would allow a pitcher to continue along with a start if they showed no fatigue, but also be removed earlier if the opposite occurred.

Our current methods for assessing fatigue rely highly on pitch count, which provides an objective measure, but does not individualize to many factors encountered in a game.  A pitch with the bases loaded against the best hitter requires more effort than an 0-2 count against the opposing pitcher.  A pitcher may also show greater fatigue when it is 90 degrees outside vs 60 with a breeze.  A speedy baserunner with 50 steals on the season may require multiple throws over to 1st base….and the list goes on.  The pitch count allows us an insight into overall trends, but the progression of being able to objectively measure individual fatigue would take our understanding to the next level.

Andrisani began collecting data in the Minor Leagues and saw just this possibility.  The expectation with fatigue would be a gradual slope downward, but that’s not what was seen.  It appears, a pitcher reaches a certain point in the game where they suddenly show a steep drop off.  According to initial data and observation, this drop off does not necessarily correlate to a loss of control or velocity as you might think.  This allows an objective insight to aid in decision making of when to remove the pitcher.  Andrisani is only scratching the surface at this point, and multiple ongoing data collections are currently occurring.  His hope is to eventually have a device to test the thrower’s arm fatigue in every dugout, allowing an objective, individualized insight to reduce injuries and maximize a pitcher’s potential.