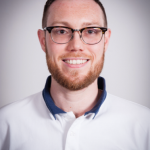 Follow Darren Brown
Darren Brown is a clinical Physiotherapist specialising in Infectious Diseases, Oncology and Palliative Care at Chelsea and Westminster Hospital NHS Foundation Trust, London, United Kingdom. His clinical and academic interests are HIV, disability and rehabilitation. Chelsea and Westminster Hospital NHS Foundation Trust is the largest HIV unit in Europe, and Darren leads the HIV Physiotherapy service providing both inpatient and outpatient Physiotherapy interventions for adults living with HIV. Darren has created and developed the Kobler Rehabilitation Class; a group rehabilitation intervention for people living with HIV providing individualised exercise and HIV-specific education. He invented the mHealth app BeYou+ (@BeYouPlus), which supports self-management strategies among people living with HIV. Darren is the HIV/AIDS special interest coordinator of WCPT Network IPT-HOPE, the vice-chair of the UK Rehabilitation in HIV Association, and a member of the Canada-International HIV Rehabilitation Research collaborative.
Read more by Darren Brown

Internationally in 2017 we celebrated LGBTIQ rights and history, as same sex marriage was legalised in Finland, Malta, Guernsey, Falkland Islands, Germany and Australia. We saw a human rights victory for Trans people when the European Court of Human Rights ruled that requiring sterilisation for legal gender recognition violates human rights. However we have also seen infringement on the rights of LGBTIQ people, such as all mentions of LGBT rights being removed from the Whitehouse website, violent deaths of LBGT people in Brazil at an all-time-high, Bermuda abolishing same sex marriage just 6 months after legalising it, and the mental health challenges experienced by LGBTIQ people that can be associated with historical and continued persecution, as discussed by @PadyyCash.

LBGT History month is time to reflect on the success of the past, and plan for the challenges of the future. This brings me to the successes of HIV prevention, testing and treatment, and the future challenges that still exist.

In 2017 Public Health England published it’s “elimination of HIV and HIV testing” report, which highlighted three firsts in the UK;

This good news was coupled with the internationally recognised U=U (Undetectable = Untransmittable) campaign, where people living with HIV who are taking effective treatment cannot pass HIV onto their sexual partners. And the success of 9 in 10 people living with HIV in the EU/EEA on treatment being undetectable, meaning the virus cannot be detected so cannot be transmitted.

These steps seem many miles away from the beginning of the HIV epidemic, where HIV activism, patient and public involvement in science, and collaborative working was responsible for the paradigm shift in HIV healthcare that we see today. Thinking about these successes, it is important to remember the journey before us. The millions of people around the world who have seen partners, family and friends die. And within the LGBTIQ community there are many men of a certain age who can tell who their own stories of the loved ones they lost, and the continued trauma that can be experienced now. Its films such as “how to survive a plague” and “we were here” or books such as “the ward” that enable us all to reflect on how much has changed and how far we have come.

But the challenges of the future remain. Stigma continues to be a significant obstacle for people living with HIV, impacting negatively on physical and mental well-being. In Toronto, Canada, a pop-up kitchen was the 1st of it’s kind to challenge stigma in which all of the kitchen staff were living with HIV; perfectly timed with the start of the Canadian People living with Stigma Index; which this video describes from the BC People living with HIV stigma index. Separately preventative methods such as PrEP, a medication effective in reducing the risk of acquiring HIV, has not been implemented into the NHS in England, while the IMPACT trial takes place. Consequently services such as 56 Dean Street have established a “PrEP shop” to meet the increasing demand, and in this TedTalk Dr Nneka Nwokolo shares her wish for HIV prevention among African women by using PrEP. However around the world the LGBT community, such as Trans people and men that have sex with men, continue to face higher risks of acquiring HIV. With 72 states or regions globally still criminalising sexual orientation, these punitive laws and homophobia reduce access to HIV prevention, testing and treatment, impacting on the rights of LBGTIQ people, their human rights and their right to health.

I can hear you thinking … but I’m a Physiotherapist, what can I do? The answer is to be an ally and an advocate for the LGBTIQ rights of your friends, family, peers, patients, colleagues and other people in your lives. You can join the conversation using #LGBTIQPhysio on Twitter. You can learn about the role of Physiotherapy for people living with HIV and challenge stigma. The lessons we have learned from HIV, is that together big changes can be achieved, but it is together that our future successes will become a reality.

So here is your chance to learn about HIV and Physiotherapy. You can follow my blogs on PhysioSpot, or you can use this free e-module for evidence informed HIV rehabilitation with a version for Sub-Saharan Africa. There are free webinars available from WCPTs network IPT-HOPE and you can follow, share and join the conversation on twitter using #RehabHIV.