The third week of the Emerging trends in global health course has focused on non-communicable diseases (NCDs) which is a topic particularly relevant to the physiotherapy / physical therapy profession.

Non-communicable diseases are not transmissible and include conditions such as cardiovascular disease, cancers, diabetes, chronic obstructive pulmonary disease, asthma, mental disorders and Alzheimer’s disease. The combined impact of these conditions on global health is dramatic and increasing:

Of 57 million global deaths in 2008, 36 million, or 63%, were due to noncommunicable diseases. The four main NCDs are cardiovascular diseases, cancers, diabetes and chronic lung diseases.
World Health Organisation

In the infographic below, the proportion of deaths attributable to NCDs in 2010 is shown in blue. View this infographic on the Health Metrics website. 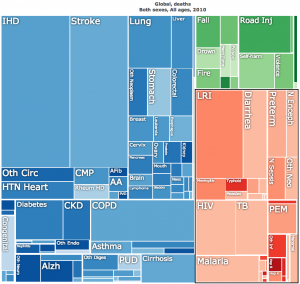 Deaths attributable to NCDs are projected to increase 15% globally between 2010 and 2020. As is illustrated on the map below (which shows the proportions of deaths caused by NCDs per 100,000 males) the burden is not evenly distributed and disproportionally affects low and middle income countries. 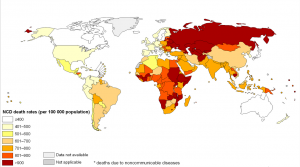 To address this growing issue The Political Declaration on Noncommunicable Diseases was adopted by the UN General Assembly in 2011 with the specified aim to to reduce premature deaths caused by NCDs by 25% by 2025. As part of the framework for monitoring progress to achieve this goal, 9 targets have been identified which include several which can be directly addressed by the physiotherapy profession (World Health Organisation): 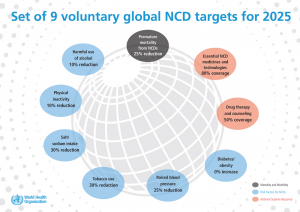 Several factors were identified during the course as important aspects of this NCD problem:

The increase in the proportion of the elderly within society is an issue that affects both developed and developing countries. With many of these people suffering long periods of ill-health towards the end of their lives, there is a related increasing burden on society to provide appropriate care. One important aspect of this ill-health is the significant increase in degenerative diseases such as Alzheimer’s which has been referred to as a pandemic of cognitive impairments.

The course identified that government policy on ageing is generally focused on the provision and costs of institutional care. However research has shown that it is much more cost effective to work with the aged to maintain their independence as long as possible by increasing personal robustness and teaching strategies to cope with frailty. This is a key role for physiotherapy with significant benefits at an individual level and also for the overall costs of care borne by society.

Exercise is a topic of particular relevance to us as physiotherapists. The significance of inactivity and its links to NCDs was addressed in a 2012 special issue of the Lancet on Physical Activity. In an article within this issue titled “The pandemic of physical inactivity“, physical inactivity is identified as the fourth leading cause of death worldwide (Kohl et al 2012).

Physical activity is described as being as a result of the interaction between an individual’s genes and their environment. Over the past 100 years human genes have not significantly changed but our environment has changed radically (access to transportation, office work, mechanisation etc) leading to a marked decrease in the levels of personal activity. This highlights a need to redesign our environment so that physical activity is actively encouraged. This could include the provision of cycle lanes and recreational spaces, making stairs easier to access than lifts or escalators and positioning parking away from offices/shops. 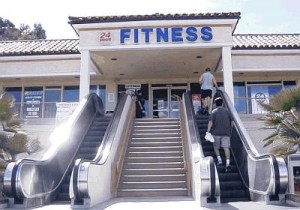 Despite a widespread focus on the health risks of obesity, research has shown that “low cardiorespiratory fitness and inactivity are a greater health threat than obesity” (McAuley  and Blair 2011). The benefits of physical exercise are noticeable at low levels of activity with the benefits ultimately tailing off as levels of exercise increase (see diagram below – Adapted from HEPA Switzerland). 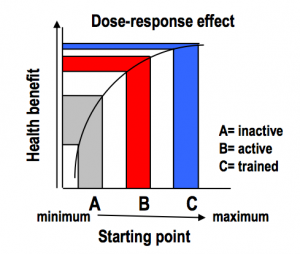 The World Health Organisations recommended levels of physical activity are:

About 25% of global NCD related deaths are caused by cancer with the highest concentrations in the developed countries but are still significant in developing countries. The most common cancers for females are breast, lung, cervical and colorectum, while for males are lung, colorectum, prostate, liver and stomach.

It is estimated by the Union for International Cancer Control that one in three cancer cases could be prevented through simple lifestyle changes:

The increasing prevalence of Type 2 diabetes is being driven by the global increase in obesity with according to the International Diabetes Federation more than 370 million adults living with this condition. The majority of this increase is occurring in the developing world which is linked to growing access to cheap calorie dense food such as fast food. People with diabetes use health services twice as much as people without diabetes and so form a significant burden on healthcare systems. Research suggests that in the first 4years following diagnosis Type 2 diabetes is reversible through adopting a healthy diet and exercise (Newcastle Magnetic Resonance Centre).

In 2010 depression was the world’s 11th most significant health burden measured in terms of Disability Adjusted Life Years (DALYs). It has been predicted that by 2030, unipolar depressive disorders will become the leading cause of disease burden in high income countries, and the 2nd or 3rd leading burden in middle and low income countries (Mathers & Loncar, 2005). Research has demonstrated that aerobic exercise reduces anxiety (Petruzzello et al 1991) and so is a valuable component of treatment.

Implications for Physical Therapy and Physiotherapy

Being a profession with core values in movement and exercise we are in the best position to tackle one of the key elements that underlies all non-communicable diseases – increasing an individual’s physical activity. With our long term and close patient relationships we are also in an excellent position to facilitate the adoption of other aspects of a healthy lifestyle such as quitting smoking, reducing alcohol intake and modifying diet (see the China Study for information on diet and NCDs). To do this we need to develop our role as well-being educator and motivator of our patients in addition to being a clinical practitioner.

For example we could think about prescribing resources such as the excellent videos titled 23 and 1/2 hours and make your day harder by Doc Mike Evans to get the exercise message across in a simple but entertaining way.

Or suggesting movies that promote life changing changes in diet such as Forks Over Knives, for anyone who cares about their health this is a must!

Physiotherapy has a clear role in assisting the aged remain independent and reducing their likelihood of experiencing health conditions. This role is going to be of increasing importance as the demographics of society change over time and has the potential to significantly reduce the burden of care levelled on society.

We need to be aware of the role of physiotherapy and particularly of exercise in treating all NCDs including diabetes, lung diseases, cancer and mental illnesses.  The World Confederation of Physical Therapy provides a very useful set of resources that highlight the role of physiotherapy and activity in treating NCDs (World Physical Therapy Day: Resources on physical activity and non-communicable diseases), cancer (The role of physical therapy in cancer) and heart disease (Cardiovascular disease).  We also need to be aware of the symptoms of these conditions, such as Type 2 Diabetes, and have a role to play in ensuring that sufferers are referred for appropriate treatment in a timely manner. 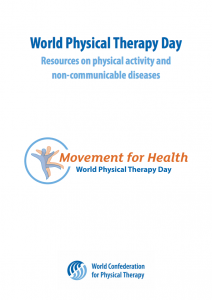 Physiopedia already has a series of pages relating to NCDs, many thanks to the efforts of Bellarmine University and their Pathophysiology of Complex Patient Problems project. However some of these pages would benefit from improvement and linking together in a more cohesive way. For example:

Physiotherapy clearly has a role to play in helping individuals prevent, manage and recover from NCDs.  With two thirds of global deaths being directly attributable to NCDs and the evident burden that these NCDs impart on society, the role that physiotherapy has in contributing to global health becomes obvious.  Evidenced by where the efforts are concentrated in contributing to Physiopedia, we are a profession that focuses on musculoskeletal and orthopaedic health.  There is no doubt that this has it’s place in contributing to the well-being of society. However we also have a huge role to play in combatting the rise in NCDs and the burden that this brings, we as a profession, must promote our skills, define our role and make it known that we are an important part of the fight against NCDs. Lets start by building the NCD pages in Physiopedia, let’s get a team on this, let us know if you’d like to help out!