Return to sport has become a surrogate outcome measure for athletes after injury but does it mean what you think it means?

It’s understandable why return to sport has become a widely used outcome measure for athletes after injury as it’s usually the motivating factor for surgery or rehab.

Unfortunately there is no standardisation or widely accepted definition for when an athlete has returned to their sport leading to inaccurate comparisons of interventions as well as challenges in managing athletes expectations.

Get Started in Sports Physiotherapy

There is also a tendency for return to sport to be reported as a binary measure – returned to sport or did not. This doesn’t reflect the complex clinical course after injury and begs the question should a spectrum or continuum be a better way of approaching return to sport?

A new systematic review published in the Orthopaedic Journal of Sports Medicine aimed to evaluate and report the differences in specific definitions and meaning of ‘return to sport’ in orthopaedic sports literature. So let’s take a look at what was found.

Methods – Is This a Good Systematic Review?

This systematic review (SR) adhered to 2020 PRISMA guidance however it was not pre-registered on PROSPERO which means there could be some reporting bias present within the review.

The databases searched were PubMed, EMBASE and Cochrane Trials which should be adequate to get broad coverage of most published literature however this could be improved by including a sport database such as SportDISCUS.

It isn’t clear when the search took place and the full search strategy isn’t available however there is a full description of keywords used and their combinations, explosions and boolean operators.

Articles were included if they studied athletes who had undergone orthopaedic surgery for a sport related injury however it doesn’t explicitly say which study design is included rather a long list of studies which are excluded.

Two authors independently performed the search with a third available to reach consensus over nay disagreements throughout the search process. As the aim of the study was to provide a description of the variation used for the term ‘return to sport’, rather than data analysis, no analysis on quality or bias was performed.

Overall this is an ‘ok’ systematic review with limitations likely because of resource and time limitations however the lack of reporting of a clear search strategy in full for each database should be present.

What Does Return to Sport Mean?

In total 29 studies were included within the descriptive review with a full breakdown of these articles fully available. The articles included within the review covered a wide variety of sports with hockey, football, baseball, basketball, American football and throwing sports across several levels of participation and ages.

Quick Summary of What Does ‘Return to Sport’ Mean?

The variability in terminology used to describe return to practice or return to play was surprising with the following terms used:

In terms of what this means and the definition of these terms there is even more variability with return to sport meaning anything from the following list:

What Term and Definition Should Be Used Instead? 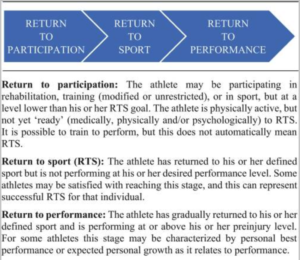 he authors of the systematic review advocate for the use of the continuum of return to sport, created by Ardern et al, which explicitly states the the athlete’s recovery status. This continuum more accurately reflects the variable course of an athletes return to sport.

Looking at this model there are some implications to consider such as the definition of performance is largely subjective and often is determined by the athlete than objective measures.

Additionally if this model was adopted widely as the standardised approach taken by researchers, there will be a higher number of athletes returning to sport however it does provide context as fewer will return to performance. Therefore this provides greater clarity and context and is a more reliable measure of ‘return to sport’.