Does the FIFA 11+ warm up protocol reduce the injury severity and incidence in football players?

Football players have a rate of injury which differs depending on age and level of participation but it is estimated to range from 2.5 to 48.7 injuries per 1,000 hours of competetive play. Therefore effective injury prevention strategies are important tools for coaches at all level of the game.

The most common injuries occur in the lower extremities with sprains, strains and contusions the most common type of injury sustained by players.  Many studies have investigated strategies to reduce incidence of injury and this culminated in the creation of protocols to provide standardisation and structure to the approach taken by coaches.

There are a number of different warm up protocols used around the world with one of the most commonly adopted being the FIFA 11+. A new study published in PLoS One aims to evaluate the impact of the FIFA 11+ warm up programme on the incidence and severity of injuries in footballers. With particular focus on inexperienced youth players in a new league without prior knowledge of the FIFA 11+ protocol.

The FIFA 11+ warm up protocol is a multi-component football specific injury prevention programme which was developed by a group of experts comissioned by FIFA. The aim of the protocol is to reduce the intrinsic risk factors of injury and is based on evidence which recommends footballers take part in strength, balance, co-ordination and plyometric exercises to reduce overall injury rates.

The programme is composed of 15 exercises broken down into three components which should take place at least three times a week:

So far there has been four RCTs investigating the effectiveness of the FIFA 11+ protcol with one systematic review pooling the results together. Result are promising with a reduction in injuries by 39% and to be more effective than the previous FIFA 11. However these studies were inconsistent with their defintion of injuries and duration and took place at recreational and sub-elite levels and more studies were recommended particularly from different countries.

The study is a cluster randomised controlled trial which was approved by the University of Cape Town and took place with 630 players from 24 teams which play in the Rwandan second division. The players were divided into two groups, 309 in the intervention group and 317 in the control group.

The control group used their teams usual warm up protocols and the intervention group used the FIFA 11+ soccer specific warm-up programme during training and matches at least three times a week over the seven month season. The mean age of the players was 20 years old and on average players had 3 years playing experience so would be classed an novice players.

Learn to Manage Tendinopathy in Season 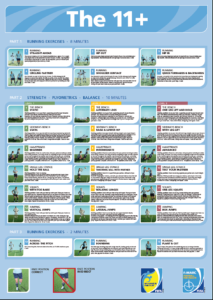 For example an injury is defined as any physical complaint that resulted from soccer participation whether in training or match. It does not necessarily mean that there is a need of medical attention. The severity of injury was classified according to the number of days of absence from full soccer participation due to injury. Injuries that resulted in an absence from training or matches for 1–3, 4–7, 8–21 and more than 21 days were classified as “minimal”, “mild”, “moderate” and “severe” injuries respectively.

None of the coaches in the control group were familar with the 11+ warm up and recieved basic frist aid and emergency procedure training  on day one of the study. The experiment group recieved full FIFA 11+ training from an instructor recognised by the Confederation Africaine de Football. Details about both control and experimental coaches training can be found within the article.

Overall players using FIFA 11+ lost 40% less days due to injuries compared to the control group (1-84 days vs 1-153 days). There was also a reduction in the rate of moderate and severe injuries in the interventon group.

Quick Summary of Fifa 11+ Warm Up

The overall, training and match incidence rates were all significantly lower in the intervention group, with an 11% reduction in the overall number of injured players and a mean reduction of time off play by six days, compared to the control group.

In terms of limitations of this study if an external healthcare professional assessed and examined the injuries  of both teams bias may have been reduced as the coaches and medical staff of the teams were not blinded to the intervention.