Evidence indicates that 25% of physiotherapists who complete training to become independent prescribers don’t go on to prescribe any medicines. Why is that the case?

Since the introduction of new legislation in 1999 some healthcare professionals in the UK have been able to prescribe medications. Initially this was limited to a small formulary available to nurses but over time this has evolved to include other healthcare professionals including optometrists, pharmacists, paramedics and radiographers with physiotherapists gaining the right to prescribe in 2013.

Introduction to Pharmacology for Physiotherapists

Unfortunately up to a quarter of physiotherapists who become non-medical prescribers don’t go on to use their skills this is much higher than the 10% of nurses who don’t go on to prescribe once they have completed their training. Previous research has taken place to explore why this is the case for nurses but not extensively enough for physiotherapists or other healthcare professionals to draw firm conclusions.

A new study published in BMC Health Services Research aimed to clarify the barriers and highlight some solutions by exploring lived experiences of non-medical prescribing physiotherapists and pharmacists.

The focus group took place on zoom during November and December 2020 and involved Physiotherapists and Pharmacists and was grounded in Interpretative Phenomenology Analysis. The aim of the focus groups was to explore the lived experience of the participants and sought to understand how non-medical prescribers perceived their practice was affected by outside influences.

Focus groups were used because they allow rich discussion between participants allowing ideas and views to be refined and developed allowing a deeper understanding of the issues being explored. In this instance what external factors are barriers to using prescribing skills in practice.

Because the focus groups were on Zoom this could also explain why only ten clinicians took part in focus groups which is far less than the initial 20 the researchers were aiming for. Further complicated by clinicians who had expressed a desire to attend being called away to clinical areas during the pandemic response. The participants were recruited from the West Midlands in the UK via email through appropriate professional networks.

The focus groups were recorded via audio transcription and facilitated by one of the research team who followed a pre-defined structure for conversation based on a priori template. This template was based on a previous Delphi study and is available in full.

Transcripts were check and evaluated by the researcher who attended the relevant focus group and was then imported into NVivo 12 software for thematic analysis. These results were then checked against line by line coding by the researchers to ensure consistency. The themes were then reviewed and consolidated and critically reviewed by the team with results reported in accordance with the COREQ statement.

Quick Summary of Barriers to Non-Medical Prescribing in Practice

Thematic analysis identified five themes with each theme having several sub themes. The five main themes identified were ‘Staff’, ‘Self’, ‘Governance’, ‘Practical Aspects’ and ‘Patient care’. Some sub themes didn’t fit well with overall themes and were therefore called orphan themes which included ‘Conflict of interest’, ‘Covid’, ‘Undergraduate prescribing’ and ‘Good advice’. All of the themes, sub themes and orphan themes are depicted in the sunburst chart below (taken from the article). 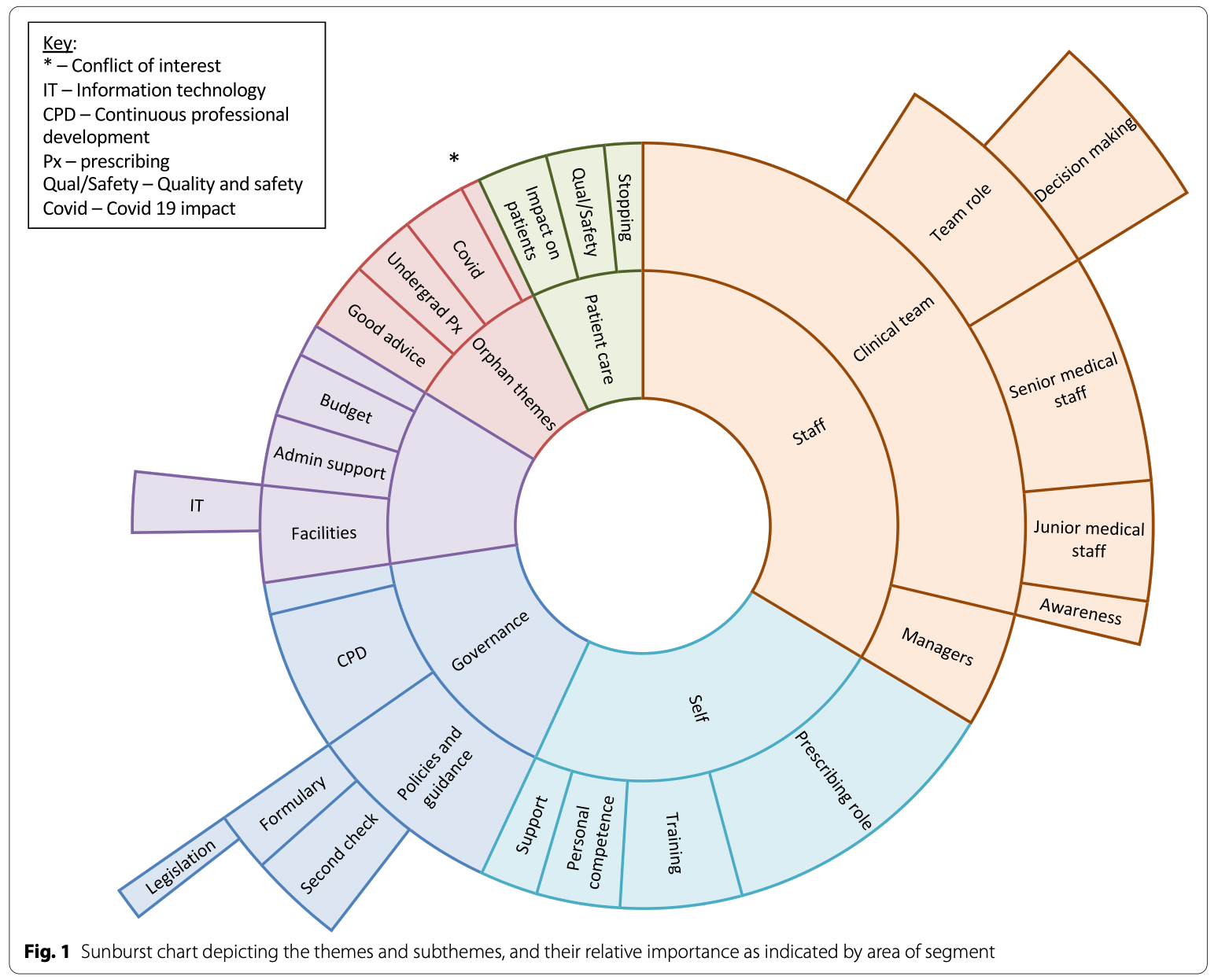 Staff was the most commonly mentioned theme with particular relation to both manager and clinical team. The relationship between the prescriber and the senior and junior medical team was highlighted as particularly important to the over success of the nn-medical prescriber. Those managers and clinical colleagues who understand the governance of prescribing were overall more supporting of the non-medical prescribers.

Self was the second most significant theme and relates to the non-medical prescribers practice. This includes the challenges associated with incorporating prescribing into their existing role as well as prescribing within their personal competence and support they gained from others. The most important issue raised form this theme is that often prescribing is often ‘added’ to a role rather than factored into the job plan itself. Therefore the potential impact of prescribing has not been fully considered and subsequently prescribing clinicians can feel restricted and not employed to their full potential.

The governance these incorporates aspects such as policies, guidelines, formulary, CPD and organisation specific registers and approaches to prescribing which may present barriers to practice. Practical aspects related to the resources required to prescribe such as IT systems, access to appropriate clinical space, changes to admin processes particularly around adding more time to existing clinical appointments. Both of these themes highlight the importance of ensuring adequate facilities and governance to support prescribers.

Patient care was the fifth theme and incorporates patient safety, quality of care and was closely aligned to the governance theme. It’s a surprise that patient care was the least referenced theme however it possible reflects the frustration of prescribers not feeling able to use their skills to full use because of the limitations explored in the other themes.

The concept map below (taken form the original study) shows how these themes relate to the clinicians and inter-relate with other themes. This demonstrates some solutions and how by solving issues such as unclear governance also improves patient care. Improvements to governance also enables managers and colleagues to better support non-medical prescribers by understanding capability, lines of accountability and role in patient care. 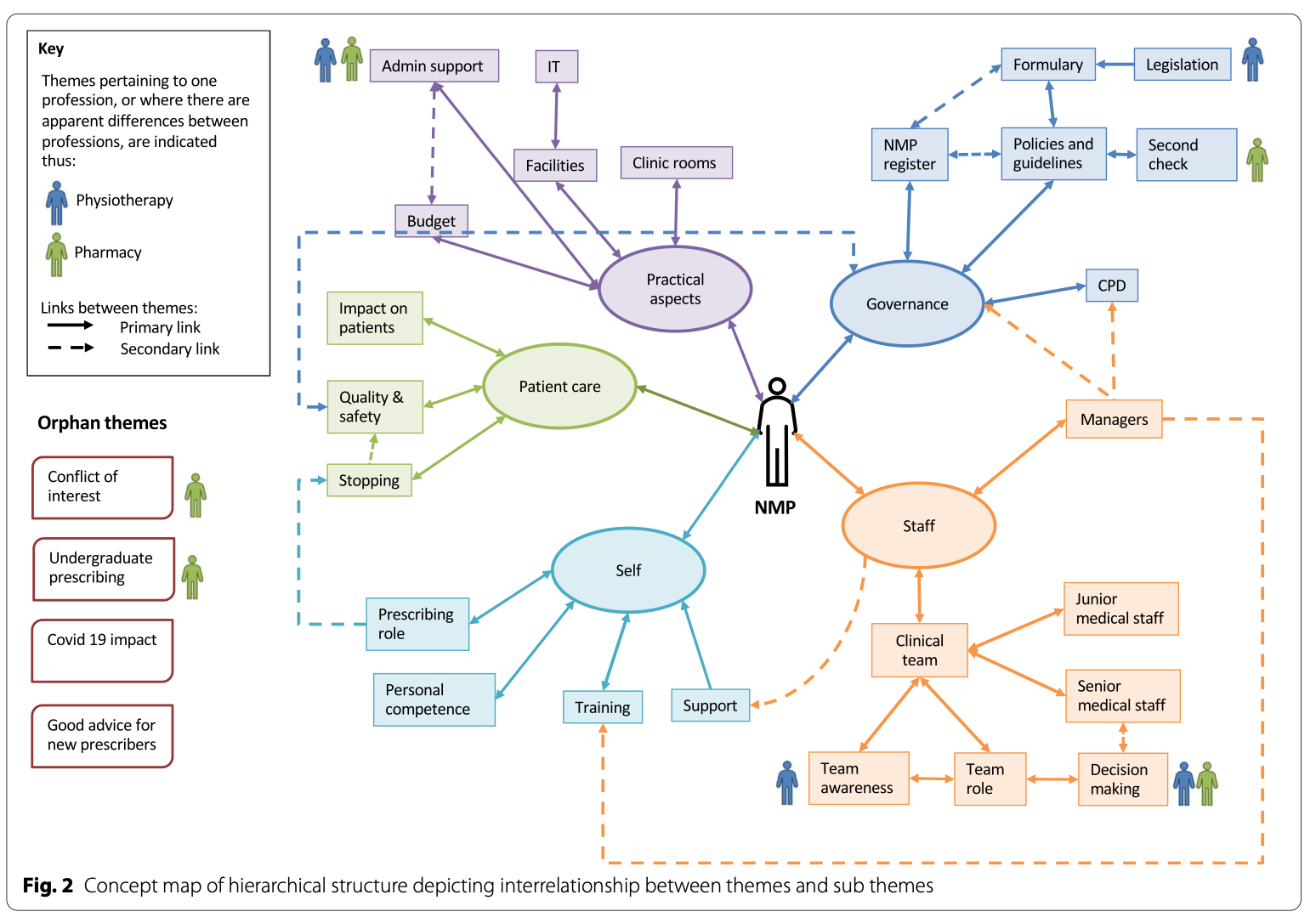 Overall collaborative working between clinical teams and managers will help make sure non-medical prescribers are supported to maximise their potential. Governance needs to make sure it is clear and updated to include multi-professional prescribers as well as including clear lines of support and accountability. Roles need to be designed with prescribing in mind rather than as an add on after prescribing skills have been acquired. Furthermore admin support and structure of clinic templates should also be revisited to ensure time to use skills appropriately.