Have you considered the role physiotherapy plays in the management of bleeding disorders?

Did you know that Von Willebrand Disease is considered to be the most common bleeding disorder in humans and muscle and joint bleeding are a significant issue for people with the condition.

There are many orther blood disorders that can affect the musculoskeletal systems of the body and this has a significant impact on individual well being and their ability to participate in daily activities. In order to effectively work with affected individuals, you need to understand the physiology and pathophysiology of blood as well as the related common blood disorders that can affect children and adults.

This brand new and exciting series of courses will take you through everything you need to know as a physiotherapists when treating someone who has Von Willebrand Disease, Haemophilia, Thalassaemia and Sick Cell Anaemia. The courses are presented by Alaa Kora who is a physiotherapist who specialises in paediatric haematological disorders and rehabilitation.

An Introduction to Blood Physiology and Blood Disorders 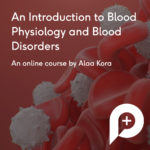 Blood is composed of many components including plasma, platelets, white blood cells and red blood cells and an adult has approximately 4-5 litres of blood circulating in their body at any given time. In this course, topic specialist Alaa Kora explains the physiology and function of blood and its components to develop your understanding of the pathophysiology of blood-related diseases in paediatrics and the implications for physiotherapy.

Blood is Essential to Human Performance

The Roles of Physiotheraoy in Von Willebrand Disease 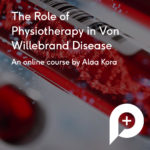 Von Willebrand Disease (VWD) is a common bleeding disorder linked to defects in the Von Willebrand factor within blood. It can either be inherited or acquired and affects up to 1% of the population. In the more severe cases of Von Willebrand Disease, physiotherapy plays an important role in managing joint and muscle bleeds in order to achieve functional rehabilitation and the return to activities of daily living.

Von Willebrand’s is The Most Common Bleeding Disorder

The Roles of Physiotheraoy in Van Willebrand Disease 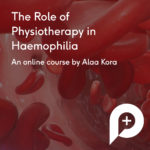 Haemophilia is a bleeding disorder that can lead to haemorrhage in various parts of the body and physiotherapy is an integral part of the management of issues caused by this condition. Bleeds often happen within the joints and muscles and the appropriate physiotherapy management of these issues are dependent on whether they are in the acute, subacute or chronic phase of recovery.

Bleeding Often Occurs In or Around Joints 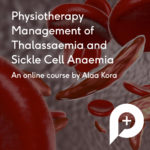 Thalassaemia and sickle cell anaemia are common blood disorders affecting children worldwide. The symptoms and complications have significant impacts on the individual’s health and quality of life resulting in an increased burden on the healthcare system. Physiotherapy has an important role in helping patients with thalassaemia and sickle cell anaemia manage their symptoms and improve their quality of life. This course discusses the two conditions and the role of physiotherapy management in each case.