Kim is from the UK and earned her Physiotherapy BSc(Hons) Degree in 2002 from the University of East Anglia. As well as gaining experience in the NHS Kim also worked in St Lucia, a small island in the Caribbean. In the UK she specialised in Neuro and Rehabilitation which are skills that she transferred to her work in private practice in St Lucia where she worked with musculoskeletal conditions and professional and amateur elite athletes; she has a passion for analysing biomechanics to maximise performance and prevent injuries.
Kim is the Content Manager of Physiopedia and also manages the Resource Repository, a great place to find resources on health and rehabilitation.
Read more by Kim Jackson

Keeping physically active is a key health priority worldwide. Whether walking, playing a sport or joining the gym, how people maintain physical activity levels is down to personal preference and available resources.

However, keeping physically active is not something that comes without risks and it is not unusual to sustain an injury. For many this may require a trip to the nearest emergency department or polyclinic but for some the process is not so straightforward, especially if you live on a small island, or in a rural location or remote township.

Yara, an Occupational Therapist (OT), lives on the small island of Sark in the English Channel between England and France, where the only forms of transportation allowed are bicycles, horses and tractors. This is not something that Yara and her family really thought about until one pleasant day having fun and playing games with friends. Yara’s husband Matthias wrenched his ankle and it was immediately evident that this was not a simple sprain.

“Everything changed during a game of frisbee”

Most medical emergencies on Sark are managed by the two local ambulances, which have been adapted to be drawn by tractors. These two ambulances are equipped to treat minor injuries only, anything more serious is treated on the neighbouring island of Guernsey – a ferry ride away. The only option on a Sunday evening was to visit the local doctor who confirmed that this was an Achilles tendon injury, possibly even a rupture. 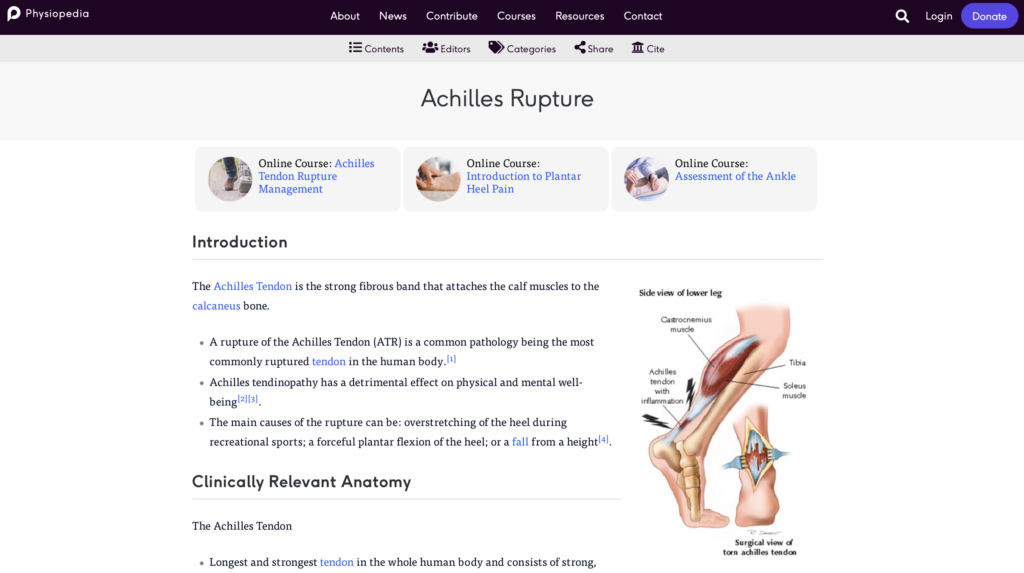 From previous experience Yara was sure that Matthias would need surgery but the doctor explained that injuries like this were first treated conservatively with a boot to limit movement, and without one available they would need to take a trip to the mainland as soon as possible.

“There was no other resource we found around achilles tendon rupture recovery that was so detailed and evidence based than the Physiopedia article.”

Matthias is a trailrunner and always out and about so both were keen to know if surgery would improve healing and speed up recovery time. An internet search led them to Physiopedia. With the evidence-based information they found on Physiopedia and the boot, they made an informed decision to continue with conservative treatment instead of opting for immediate surgery, and followed the advice and rehabilitation programme on Physiopedia. Matthias stuck to the treatment plan and did the exercises multiple times per day. Having the structured treatment plan to follow gave him control and had a positive impact on his recovery.

“We are very grateful for the Physiopedia resource. It empowered us and gave my partner motivation” 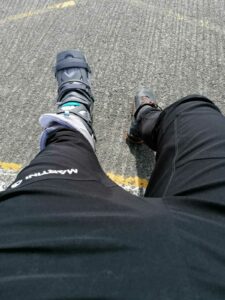 After three weeks Matthias was due to go to the hospital to get the position of the boot changed – but the sea was rough and the boat could not sail. When he called the hospital and explained the situation, Yara’s background and the fact that they felt confident handling it themselves, the doctors were happy to instruct them on how to adjust the boot. In the end, Matthias only attended half of the hospital visits that had been scheduled as he followed the rehabilitation provided by Physiopedia.

Unfortunately, four days out of the boot and, underestimating the angle and pressure a foot experiences when walking uphill, which was necessary to reach the grocery store on the island, the tendon ruptured again.

At first Matthias was disappointed but then he took it as an opportunity to document and share his recovery via his Instagram. This time it was the doctor who suggested surgery but Matthias still trusted what he had read on Physiopedia and he could see that the rupture was tiny this time – reported by the doctor as 8 mm. The family summer holiday to Austria was already booked and Yara and Matthias were keen to go, so they did. No mean feat – travelling on a plane with crutches and a toddler, without having had surgery. This time though, Matthias did not need to go back to hospital – they managed the boot position themselves and after around 8 weeks when he felt good the boot came off.

After he removed the boot for the final time, Matthias focused on his running technique rather than speed or distance, as optimum recovery was necessary for a 65 km ultra trail marathon in the Austrian Alps. Thanks to the evidence-informed self care, telerehabilitation guidance from his medical team and his diligent rehabilitation, Matthias managed to run 65 km with 3600 m elevation in the Alps – in just 12h 15 min.

“He was feeling great afterwards and did not have any achilles problems at all.”

Yara is now part of the Physiopedia team developing tools and resources for rehabilitation professionals and health seeking individuals around the world who are looking for high quality evidence-based knowledge and guidance. At the time Yara was not looking for a job “I just felt that the competences they asked for in the job description were an exact match to my experiences”. And as they say the rest is history!